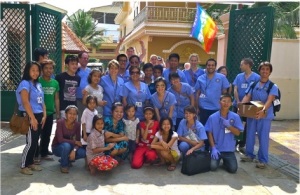 A Honolulu Dentist on a mission to Cambodia

A lot of things have happened since November… here in Hawaii we get caught up in the holiday season, if you can imagine coconut trees strung with Christmas lights.

As if the holiday season was not busy enough, I spent all of February off island.  I worked again at the Molokai Community Health Center, and then spent several weeks in Cambodia where I was blessed to participate with the Cambodia Health Professional Association of America (CHPAA) and their medical mission to Cambodia.  Cambodia is one of the world’s poorest nations.  The civil war from 1970 to 1975, the Khmer Rouge regime from 1975 to 1979, and the Cambodia-Vietnam War from 1978 to 1979 virtually destroyed Cambodia’s economy.  Although progress is being made, as of 2007 the latest year UN Statistics are available, 30% of the population falls below the national poverty level. Poverty in Cambodia is overwhelmingly a rural phenomenon.  Over 93% of the country’s total number of poor live in rural areas, 6.2% live in urban areas, with a tiny percentage in urban Phnom Penh. CHPAA’s mission is to provide medical and dental care to those desperately in need.

Patients came from miles around, lining up overnight with the hopes of being treated

In Cambodia, one of the free clinics was set up at the Khmuonh Health Center in Khan Sen Sok, a municipality of Phnom Penh and one of the most underserved areas in the Cambodian Capital.  Seen on a first-come, first-served basis, patients came from the surrounding areas, other parts of Phnom Penh and distant provinces.  The need for care is great.  In addition to this clinic, radio and television announcements brought many patients to outlying clinics where part of the medical/dental team travelled to each day.  It was a busy week.  By midmorning of our first clinic day, there were thousands of people lined up.  They came from surrounding villages, overnight and got in line.. hoping for their chance.

There were 11 dentists total participating in this 3 week clinic.  About half of us stayed at the Khmuon Health Center, and the rest of us, travelled daily to outlying communities.  The day started at 6am with an average of an hour bus ride and each day, we would visit a different location.   I was responsible for making sure that all the equipment and supplies needed for the day was available, and was the 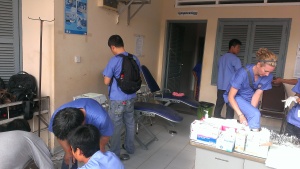 only dentist who was assigned to the travelling clinic for the entire mission.

Once there, our first task was to set up the clinic.

Again, patients lined up with the hopes of being treated were triaged, and the dental patients were sent our way.  Many of the people had never seen a dentist, and were experiencing dental pain.  Unfortunately, most teeth were not able to be saved, and needed to be extracted.

It was a truly humbling experience.  Poverty rates are high among those whose household heads have little or no education, dental education is non-existent at its most basic level.  Many patients were unfamiliar with the use of a toothbrush and still had fears that an extraction of a tooth would result in blindness.  My heart went out to them and I look forward to returning again.

is dry season in Cambodia.  It is beautiful and exotic.  On the way to the outlying clinics, we saw some beautiful areas which were dedicated to agriculture.

True to form, I love to eat and found the food delicious and different.  Most exotic?  fried tarantulas… quite tasty actually.

We monitor our email daily and will usually respond within one working day during open hours. For questions call 808-941-2911